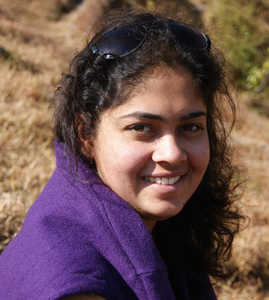 Presently biding my time : treading the jungles of Dandakaranya in central India

When we first entered the Attic, we were handed a long list of recommended reading. That was a wake up call. And since then, I have had several such moments when what seems commonsensical is conveniently ignored by many writers. I take back those elementary essentials with me as I leave the Attic and step into the harsh wild world of literary fiction writing.

More than anything, I am grateful to Anita for infusing the much needed confidence in me.

Raksha is an independent journalist, concentrating on human rights, gender and politics. For the past four years, she has reported for the New York Times, Al Jazeera America, The Guardian, TIME magazine, Christian Science Monitor, DAWN, Caravan, The Hindu and South China Morning Post.

Currently, she is working on a documentary film on the life of the Rationalists in India that will be aired on Doordarshan.

A Fulbright scholar, she graduated from the Journalism School, Columbia University, New York, in 2011. Immediately after graduating from Lady Shri Ram College, New Delhi, in 2007, she did a course on Conflict Transformation and Peacebuilding from the University of Peace. This year, she was a part of the India Journalism Programme as a Chevening Fellow at the University of Westminster, London.


Raksha’s reading of her part as author of the collaborative fiction piece, Physician, heal thyself