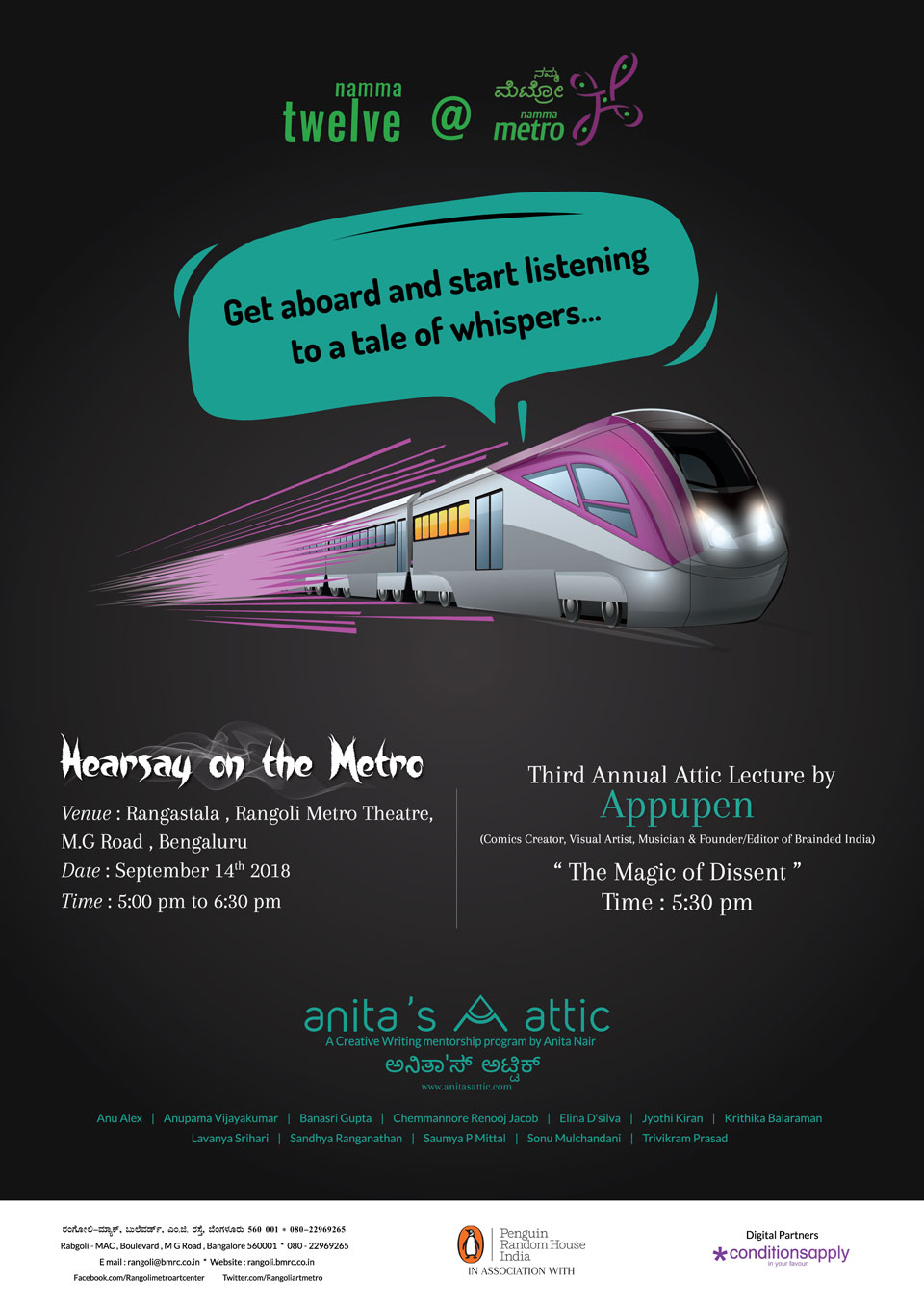 Join twelve authors for an evening of ‘Heresay On The Metro’ showcasing their literary strengths at the Rangoli – Metro Art Center on 14 September 2018 at 5.00 pm.

Anita’s Attic, India’s premier ‘literary mentorship program’ helps aspiring writers hone ‘The Art of Storytelling’ across multiple genres. This intense twelve-week workshop conducted by the celebrated author Anita Nair not only enables literary talents to find their voice but also introduces them to established writers, publishers and agents who visit ‘The Attic’ every week.

The graduating batch of Season 6 comprises I.P consultants, art curators, knowledge managers, visual communicators, technologists, homemakers, marketers and digital strategists. What binds these diverse folks together is their friendship with words and an overwhelming desire to become published authors someday. To mark their graduation, they have collaboratively spun a satirical tale on the power of rumors, fake news and gossip, called “Hearsay On The Metro.”

The evening will also host the 3rd Annual Attic Lecture by Appupen, on the subject “The Magic of Dissent“.

A comics creator, visual artist and musician, Appupen tells stories from the mythical dimension called Halahala.
Appupen has been creating the mythology of Halahala since 2005 and his first graphic novel, ‘Moonward’ was published by Blaft in 2009. Then came ‘Legends of Halahala’ and ‘Aspyrus’, both from Harper Collins. His fourth graphic novel, ‘The Snake and the Lotus’, is published by Amazon-Westland, 2018. Appupen launched his online comic series with the popular superhero satire ‘Rashtraman’ and the politically charged ‘Dystopian Times’ in 2015. He is the founder/editor of Brainded India, an arts collective with an agenda. Join us for an exciting audio-visual presentation that brings alive the magic of dissent as seen through Appupen’s eyes.

The Attic Lecture will be followed by the Season 6 Graduation Event of Anita’s Attic.