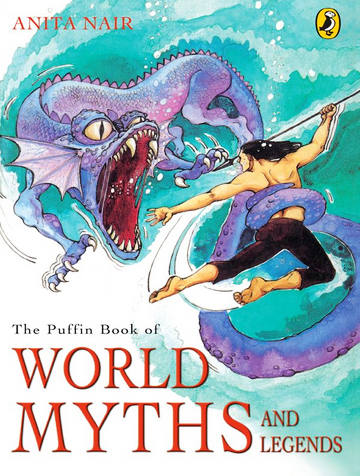 Fairy tales, folk tales, mythology – like every Indian of my generation, these were part of my growing up years. Some I read. Some I heard. But everything I read and heard was confined to the ever popular Greek and Roman mythology, the Hindu Epics, the Panchatantra, the Jataka tales and the fairy tales of Hans Christian Anderson and the Grimm Brothers. In my late teens I chanced upon a world dictionary of myths which in a line or two described myths and legends from different parts of the world. Somewhere deep within me I knew an urge to re- tell them as proper stories.

Probably I even first cut my writing teeth on them. Creating characters, situations and dialogue from a mere kernel of a myth. I wrote them and filed them away not knowing what I would ever do with them. Until many years later Penguin India wanted to know if I would like to try my hand at writing for children. I have a book already written, I said almost apologetically pulling out typewritten papers from the time I had clack – clacked them into my second hand portable typewriter. All I needed to do was revise it as I transcribed it into the computer.

In 2004, Puffin India published it as the Puffin Book of World Myths and Legends. It was my first published title for children. And nothing gives me greater sense of joy than when I realize that this is a book that continues to enchant young readers just as the myths first enchanted me.

The Puffin Book of World Myths and Legends will be available at all online retail stores from June 7th 2015 and in book shops 4-5 days thereafter.