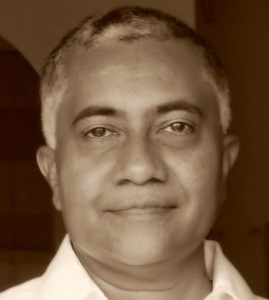 Presently biding my time : As a Director in a software company

As I secretly follow my dream of : being an impactful writer

As good as : Abraham Verghese, Arundhati Roy and Anita Nair who assure me that the poetry around us is waiting to be heard.

After publishing about a hundred or so blog posts, I discovered key areas that really excite me. I wanted to strengthen these areas further in the form of a novel. I have had many spluttering starts and lacked the discipline to execute on that plan. My other great weakness was that I stopped with my first raw draft and did not take the time to edit it to perfection.

Twelve weeks with Anita’s Attic Creative Writing program changed all that for me. Writing is an individual sport but writing well needs a guide and mentor. I saw myself set goals and deadlines for my work. I achieved them week after week with the able guidance and feedback from Anita.

Anita exposed the twelve of us to a range of talented individuals from the writing and publishing world. I was inspired by some of their struggles as a writer. I was fascinated by the amount of research that went into their work and their personal life altering events that shaped their work. This gave me a good 360-degree view of the industry.

Peter Vas is a Bangalore based IT professional. He has a Masters degree in Structural Engineering from Marquette University, Wisconsin. He cherishes his blogs on Indian culture and music on ARPANET Usenet Newsgroups before Tim Berners-Lee invented the worldwide web. He is taking a hiatus from Facebook to pursue his writing ambition but has found himself in a semi-ruinous relationship with Twitter. He has successfully slayed annoying Whatsapp notifications, in pursuit of higher writing goals. After spending most of his career life in Chicago, he returned to India for a rediscovery and loves it. He enjoys his spare time reading, writing and listening to podcasts and music. He is writing his first novel that gained traction at Anita’s Attic. His family is very encouraging of his disappearing act, which sometimes worries him.

Peter’s reading of his part as author of the collaborative fiction piece, Physician, heal thyself